What is high fashion’s obsession with cheap eats? 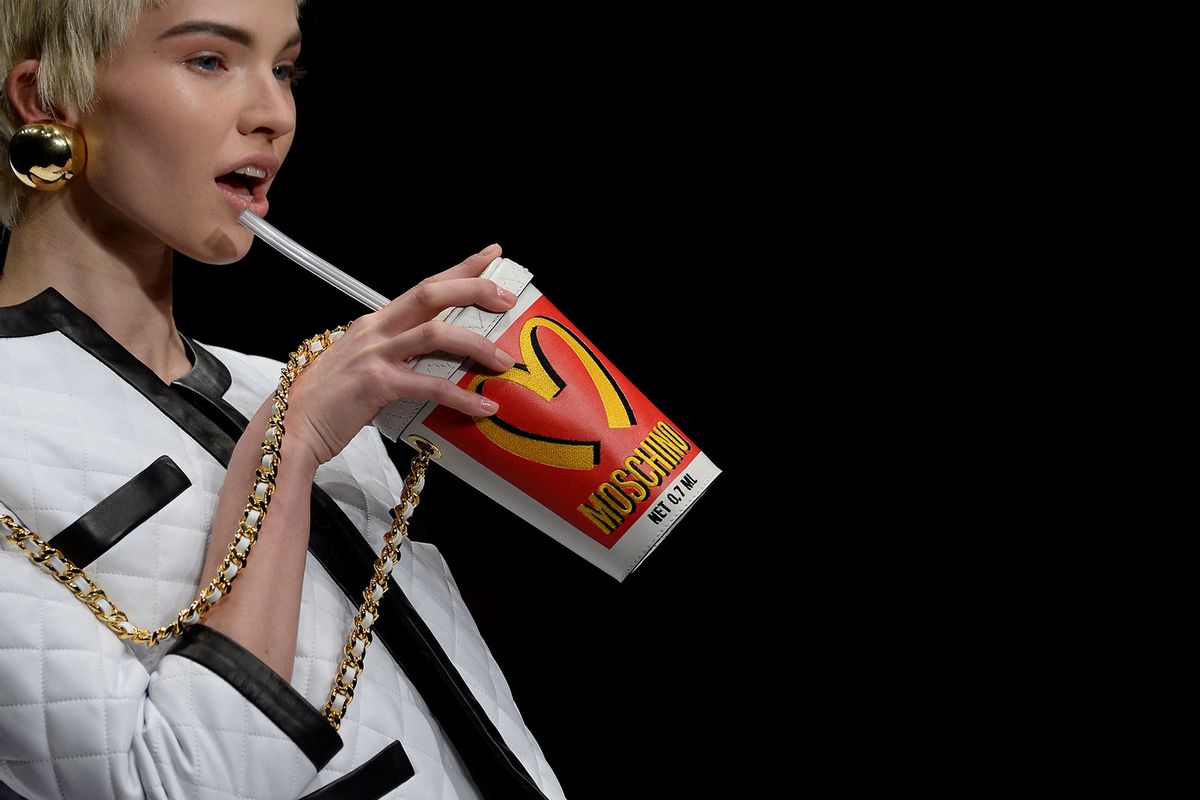 Fall’s latest fashion trends — from a crumbled package of chips “it bag” to a pasta box crossbody clutch — look like they’d all belong in your mouth rather than on a Fashion Week runway.

In June, artist and designer Nik Bentel announced the return of his viral Barilla-inspired crossbody bag, which first made rounds on Twitter in August of last year. The revamped design is akin to a box of De Cecco’s penne pasta (there’s no brand name on the new bag, unlike its predecessor) that’s adorned with a dainty purse handle and an elegant gold chain. Similar to his 2021 release, only 100 of Bentel’s recent “Pasta Bag” were available for sale for a limited time only.

When asked about his bag’s design, Bentel told Food & Wine, “I try to make every object unique, but I think this one is slightly different because of the online excitement. I felt like I needed to do another one, but I also think the aesthetic is totally different.”

He continued, “A few small pasta companies reached out to me, asking to collaborate on a pasta bag. But I think I needed something that was a bit more ubiquitous. There’s a certain aesthetic that pasta companies go for in terms of advertising their pasta. They use certain colors, certain gradients, certain fonts, and certain words, so I tried to incorporate as much as possible into this.”

Bentel’s “Pasta Bag” can easily be mistaken for an ordinary box of pasta — the former flaunts vibrant hues of blue and yellow, a nutrition label on the side along with the pasta’s weight, listed both in pounds and grams. There’s also a brief description of the “pasta” and multiple images of penne plastered on the front.

Alongside Bentel, Balenciaga dipped its toes into food fashion this past October. The international fashion house, in partnership with Frito-Lay, debuted its $1,500 clutch that resembles a crumpled, discarded bag of Lay’s potato chips. Called the “L.O.L. Clutch,” the bag is available in four distinct “flavors”: Classic, Flamin’ Hot, Limón, and Salt & Vinegar. And while the “flavors” are not explicitly mentioned on the bag, it’s not hard to guess simply from the bags’ designs, which mimic the OG chip packets.

The intersection, albeit bizarre at first glance, is actually quite apt considering that fast food and high fashion are not far off from one another. As journalist Zing Tsjeng explained, “Fast food is a speedy sugar high, mixing feel-good nostalgia with trashy cheerfulness. It’s like the experience of fashion itself: we’ve all had that instant hit of pleasure when we buy something we know we shouldn’t but can’t resist anyway. Put it another way — there’s a reason quinoa and brown rice haven’t inspired a fashion collection.”

That sentiment still holds true today, especially amid an ongoing pandemic when junk food consumption and cravings are at an all time high. Per a Jan. 2022 report published by MDPI, chips, cookies, ice cream and sugar-sweetened beverages, like regular soda, fruit drinks and juices, have all been popular choices of foods in recent months. So, it’s not surprising that they are now making their resurgence in art and fashion.

Bentel told Food & Wine last year that his famed Barilla pasta bag was created shortly after he enjoyed “his 100th bowl of penne pasta” during the early few months of quarantine. It was then that he wondered how he could repurpose the pasta box and, eventually, he settled on making it a handbag.

“The bag is an irreverent take on the past year of staying inside,” Bentel explained. “Using the mundane objects we had lying around during the pandemic, and turning them into something a little more thrilling for our post-pandemic world. The goal of the bag is to inspire a little bit of thought and reflection on being able to create something exciting from the mundane.”

As for the “L.O.L. Clutch,” Balenciaga’s creative director Demna was inspired to create the bag because he “loves chips in general” and “has carried a bag of Lay’s potato chips as an accessory before.” Earlier this year, Demna was spotted clutching an empty bag of Lay’s Original Wavy Potato Chips at the graduate show of Antwerp’s Royal Academy of Fine Arts. The Georgian designer reportedly “held on to his flat Lay’s bag throughout the day, from his front row seat at the student fashion show to the festivities afterwards…,” per Paper Mag.

High fashion, today, remains both attainable — and wearable — to only a select few. But high fashion meshed with cheap eats changes the dynamic entirely, allowing luxe wear to be more personal and familiar to the public. Sure, carrying a $1,500 Lay’s clutch is extreme. But at least it looks like a bag of Lay’s potato chips, an item that’s readily available at your nearest convenience store.

“The result is a set of delightfully fun and comically contrasting shots. Sweeney looks like a classic ingénue, wrapping herself in a fur stole outside of the Hollywood Wax Museum,” W Mag’s Carolyn Twersky wrote. “[I]t is the contradiction between Sweeney, in her custom French look and bombshell beauty, up against the everyday monotony of a Hollywood souvenir shop that makes the photos so enjoyable. The actress seems very at ease in the setting, despite the fact that she in no way fits in.”

Sweeney took part in a similar shoot following last year’s Golden Globes, when she posed in front of a nearby 7-Eleven, dressed in a poofy pink Ralph & Russo dress and sipping on a Big Gulp.

“There is something so pleasing about seeing a gown-adorned Sweeney in the most pedestrian of places. Probably because who doesn’t have the urge to stuff their face with junk food after a night of squeezing into formal clothes and making small talk?” Twersky added.

Perhaps that’s the appeal of it all — both high fashion and cheap eats are fun and quirky, making them a perfect fit for one another. And even if most consumers aren’t able to afford such humdrum-turned-luxurious goods, at least they’ll be enthralled by them.

stories on fashion and trends: