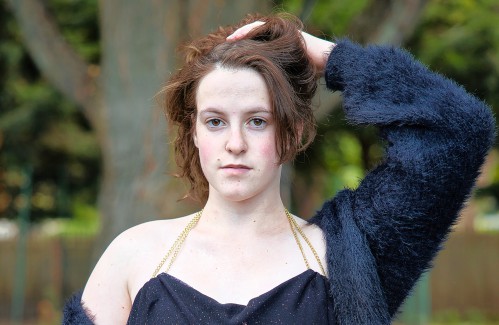 Isabel Miller glances at a fabric remnant and recognizes a tube top waiting to be made. A pair of jeans that don’t fit? Miller envisions a denim corset-style top.

“Levis are made of excellent quality fabric,” said Miller, 16. “Why not make something else out of the jeans instead of throwing them away?”

“I started working with fabric when I was pretty young,” said Miller, “mentored by my neighbor, Gail Callahan. Gail is best known for dyeing fabric and doing surface design. I learned a lot from her. I remember we made two dresses when I was 9 or 10 years old.”

With basic skills under her belt, Miller took it to another level last year by signing up for sewing classes at Swanson’s Fabrics on Avenue A in Turners Falls. “Each project gives me additional skills and inspires me to work on new concepts.”

Something as simple as cleaning out a closet can ignite in Miller a whole new set of ideas. “I found a dress belonging to my Mom that she no longer wanted or needed, and I converted it into a halter top and loose pants. That one was really fun,” Miller said.

Miller found a rectangular bit of fabric at Swanson’s: “When I saw the green-and-yellow leopard print, the wheels started turning,” she said. “I put in darts, golden eyelets, and ribbons for lacing up the back.” Voila! An elegant tube top.

She’s been known to go to a hardware store to purchase a thin chain in order to hold up the main part of a formal handcrafted dress.

“I can make whatever I want,” she said, “instead of having to shop online or in stores. And a bonus of upcycling is that it reuses resources.” Miller added, “I believe textiles rank second among the world’s largest contributors to pollution.”

Miller is correct: not only does pollution from textiles rank number two — outpaced only by oil and gas sectors — but “the fashion industry emits more carbon than international flights and maritime shipping combined,” according to Business Insider, an American online media company.

A 2020 CNN feature noted that “fashion is responsible for up to one-fifth of industrial water pollution, thanks in part to weak regulation and enforcement in producer countries like Bangladesh, where wastewater is commonly dumped directly into rivers and streams.” The discharge often contains carcinogenic chemicals, dyes, salts and heavy metals that harm the environment, including tainting drinking water sources.

And the BBC reported that “85% of all textiles thrown away in the US in 2017 — roughly 13 million tons — were either dumped into landfills or burned.”

Miller not only creates utilitarian beauty, she’s part of the solution by keeping textiles out of our planet’s overloaded waste stream.

In describing her upcycling process, Miller said, “Sometimes it’s instant recognition: I know exactly what I’m going to make. Other times, it evolves. I’ll design something on paper or in my head, and then go after the materials.”

Going after the materials can mean Miller checks out home closets or thrift stores, including Swanson’s, an impressive hub of upcycling. In addition to sewing classes, like the one Miller took, Swanson’s is known locally as “a textile merchant for the people, by the people.”

Swanson’s website describes the business as “the fabric store of our collective dreams.” The store is stocked with unused items from local sewers; its mission is “to supply everyone with affordable materials while helping those with too much reduce their stashes in a comfortable way. By sharing what we have, we all get what we need.”

While Swanson’s accepts many materials, tools, and supplies related to sewing, knitting, or other fiber crafts, they do not accept clothing, nor fabrics with strong fragrances or odors.

“I love spending time at Swanson’s,” said Miller, who goes there regularly to work, browse, and help out. She also has a home studio in a converted attic space.

In addition to working with Gail Callahan on various projects in her younger years, Miller was exposed to “handwork” at Hartsbrook, a Waldorf school in Hadley. “We knitted, crocheted, and made stuffed animals and dolls.”

For much of her life, Miller participated seriously in equestrianism. “I worked with and learned from horses for about nine years. I loved it, and it was a huge responsibility.”

Miller’s early mentor, Gail Callahan, shared impressions of her young neighbor. “Isabel and I have always been connected through interest in fabric. I find her incredibly determined and hard-working.” Callahan observed that Miller’s long association with horses at Muddy Brook Farm in Amherst is emblematic of Miller’s drive and devotion.

“She cared for those horses with astonishing commitment,” Callahan recalled, “never once complaining about mucking out stalls or working long hours. And Isabel won many, many blue ribbons in horse shows. It just seemed to come naturally to her.”

Callahan noted, however, that Miller is never one to rest on her laurels. “I recall that she befriended a horse who was new to the barn, and new to her.”

Miller remembers that horse well: “He was definitely a project for me, meaning that I learned from him and I think he learned from me. I had the absolute best time with him.” She added, “Even if we didn’t win [first place], I was super proud of our teamwork.”

Her work with horses yielded deep benefits for Miller. “It really helped me with my anxiety issues,” she said. “I tend to get burned out on projects that are too big, too overwhelming. And yet I’m willing to work hard and stick with something I care about. That’s what leads to personal victories for me.”

That kind of determination led Miller to attend a month-long arts camp at the Putney School in southern Vermont this summer.

“It was so great,” Miller said. “My teacher did a project on zero-waste fashion.”

At the arts camp, she also learned that “fashion design doesn’t have to be perfect in terms of seams and lines. I think of my work as art, so it’s OK when the lines blur.”

Miller sews in hours-long blocks, several times a week, and prefers having no deadlines. “Sometimes, it’s hard to get started,” she said. “So I’ll put on Netflix or some show I’ve already seen, just to have the background noise.”

She can imagine someday starting a small business to help people design clothes. “I could help customers with concepts, and then I’d produce the outfits or items. It could happen. For now, though, I’m going to focus on making projects and building my skills.”

Miller’s dad, Rick, taught photography classes at St. Joseph’s College on Long Island “for years, even after we moved to Greenfield. When I was little, he’d be gone four days out of seven,” said Miller. Her mom, Laura Townes, is a financial advisor.

“Of my main interests,” said Miller, “modeling is the slowest-moving project so far. But I did a photo shoot this past May for a modeling portfolio, and was coached by the photographer.”

Miller was fascinated by tips offered for effective modeling. “There are so many ways to pose, so many interesting shapes that can be made by the human body,” she said. “The photographer made suggestions about moving my chin toward the light — which apparently is a big modeling tip — and to be aware of what my hands were doing. It was a good experience.”

She’d like to submit a portfolio to modeling agencies, “and also share some of my original creations.” Yet Miller is well aware of attitudes in and about the modeling world. “There’s a lot of baggage about body image. But I see positive stuff on social media where people are breaking stereotypes.”

Speaking of social media, Miller said, “It can suck you in, but there’s also a lot of great stuff. Like on Tiktok, there are many wonderful content creators. I can watch fashion designers showing their process. That’s really helpful.”

Miller participated in a Pride Fashion Show while at the Putney arts camp. “The show allowed us to feature our talents. The film students filmed, photography students took stills, and fashion designers displayed and modeled our creations.”

She described an outfit she both created and modeled: “It started as a shirt, which I upcycled, cropping the body of the shirt. I cut the sleeves off and used the rest of the shirt to make the top of a skirt. I added other scraps to complete the skirt, which had an open front.”

Did Miller throw the discarded sleeves away? Of course not.

“I ended up wearing the sleeves as separate accessories,” she said. “But instead of putting them on the usual way, I put them on backwards, which meant they actually fit perfectly, with the narrow parts sitting snugly on my upper arms.” To complete the outfit, Miller engaged in a bit of leather working to create a closure for the skirt.

And she’s going places. “I want to travel. I want to do so many things.” Miller says she thinks about life on a grand scale. “I can’t imagine doing a job I don’t enjoy just to survive. I don’t want to settle for that. I won’t go through life bored or burned out. The most important thing, to me, is to do things I enjoy.”

Clearly, this teen is well on her way.

Eveline MacDougall is the author of “Fiery Hope” and a musician, artist, gardener, and mom. She considers clothing to be wearable art. Readers may contact her at [email protected] with feedback or tips about topics related to Home and Garden columns.