The End of Gender – The New York Times 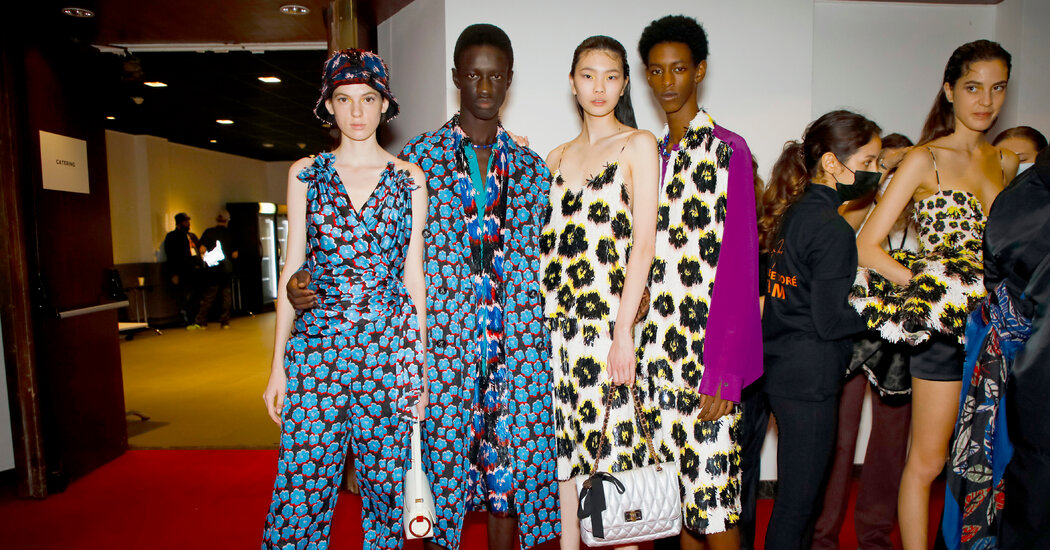 One of the biggest trends of the spring 2022 fashion shows that just ended was not any particular silhouette or color, but rather the fact that many designers put both women and men on their runways in what once would have been termed “women’s wear” — not so much as provocation but simply as a matter of fact. Here, our two critics debate why, and what that may signify in terms of gender identity, sexuality and society.

Vanessa Friedman: Guy, I was thinking of you during the last two weeks of Milan and Paris shows because while they were nominally “women’s wear,” that term and its corollary — “men’s wear” — your bailiwick — seem increasingly meaningless.

This wasn’t gender fluidity or gender neutrality or dual gender — all hybrids that have been thrown around to refer to shows that combine men’s and women’s collections, say, or feature clothes that are sort of generic and not really identifiable by the traditional categories of gendered dressing. This was something new. Like … gender agnosticism. So we’d see classically “girlie” clothes in bright colors, soft fabrics and lots of decoration, only they were worn by guys.

At Raf Simons: skirt suit on her; skirt suit on him. At Valentino: washed taffeta in chocolate, violet and bright green on her; the same on him. Ditto Lanvin. At Marni, we saw giant shreddy sweaters with big flowers on both men and women. By the end of season, it had become so common, it barely registered with me. I just saw clothes.

It seems to me that this is an interesting and potentially significant systemic change — one responding to cultural and social shifts, especially among younger generations. But I also wonder just how widely it resonates beyond fashion and pop culture. (Hello, Harry Styles, Billy Porter and Lil Nas X.) What do you think?

Guy Trebay: Let’s skip past gender for a moment and talk about sex. More than the recent gender agnosticism — which is just the latest development in a process begun a century ago with Chanel and women in trousers — what I’ve been struck by lately in fashion is a skittishness about the anatomical differences that still, for the most part, differentiate men from women.

With the exception of, say, someone like Ludovic de Saint Sernin, who interspersed the ostensibly female offerings in his show with men wearing what looked like Cosabella lingerie, many designers put forth clothing so voluminous, you’d never guess their wearers possessed secondary sexual characteristics.

V.F.: But that’s my question: Is this the natural end of the progression started in the 1920s by Gabrielle Chanel? After all, if we now accept women in pants without blinking, which I think everyone does (except maybe certain religious groups), should not men in dresses and skirts be accorded the same reception?

That’s actually how the New York City Commission on Human Rights interpreted the law pertaining to office dress codes a few years ago: An employer could require employees to wear certain garments, but only if both sexes could wear the same garments (e.g., if women had to wear heels, so did men).

And if we are still freaked out by men in dresses and skirts, as arguably most people outside of this tiny fashion sector are, is that perhaps because we are still clinging to old power structures? Is it seen as somehow disempowering for men to have access to classically female clothes? That it somehow … weakens them, since women are supposedly the “weaker sex.” Fashion may be ahead of the curve on this one.

G.T.: There is a lot of beautiful stuff out there. Yet regardless of the quality of the designs we’re seeing, the mood can seem austere to the point of being puritanical. It is the same on both sides of the ocean, whether at an Aaron Potts APOTTS collection that saw models sheathed in body-concealing raffia aprons inspired by the Hamar tribespeople of the Omo River Valley or, on a broader scale, at Valentino, where bodies continue to be draped and enveloped by volumes of fabric as much architectonic as organic. What is happening here?

V.F.: I disagree with you about the lack of sex. Yes, some designers — Raf Simons and Aaron Potts, as you say — put everyone in giant work shmattes, but just as many made skin a major accessory. And even Raf said he found volumes seductive when we were talking after the show.

But it is also true that those who did focus on the bods, like Donatella Versace, did so in a traditionally gendered way. I mean, her show started with a dozen shirtless men parading down the runway to different positions, then pulling on silk ropes to get a ceiling covering undulating. It was like some sort of camp sultan’s den. And then there were those painful bodysuits and stripper heels on women at Saint Laurent.

On the other hand, at Marni, both men and women wore the same striped stretch jersey dresses, which spiraled around their bodies and were sliced out at the side. They didn’t leave all that much to the imagination. So what do you make of that?

G.T.: Remember “Unzipped,” Douglas Keeve’s 1995 documentary about Isaac Mizrahi? Isaac had done a collection inspired by “Nanook of the North,” only to find, right before the presentation, that another designer had done the same thing?

Sometimes it feels like there is some kind of designer hive mind. It’s not quite at a conscious level. A couple seasons ago in Paris, GmbH showed a collection in which the male models were bare shouldered or bare chested. Now everyone from Versace to Willy Chavarria is doing it. I get the sense that fashion is playing catch-up with the broader culture.

Spend any time on social media and you know how readily guys are now adopting elements of traditionally feminine apparel and grooming. It’s not a huge stretch to imagine normalizing men wearing dresses or whatever in the workplace. Kilts are already in evidence. Yet, while some European designers vamped desire in a kind of cartoonish fashion, we still aren’t seeing much that seems particularly sex positive or even body affirming.

Maybe it’s an aftereffect of our enforced isolation or of living inside of screens. Just about the last thing I think about anymore when I view runway fashion is seduction. I often recall that Vivienne Westwood remark about the real end point of all this dressing up is two people getting naked. It’s as if we forgot about sex appeal.

V.F.: Well, yes, to get naked. But also to be armored, to tell the world who you are, to indicate membership in a group. And that’s why this gender agnosticism matters. To that end, do you really think guys are going to wear dresses in Congress or on Wall Street or even Facebook soon enough? I’d like to think yes, but I am not so sure. We cling to our fashion prejudices pretty tightly, especially when it comes to gender. Maybe this is why you are feeling less of a seduction vibe.

Generally my sense is a collection can communicate a focus on politics or physicality but rarely both. And right now, the message about gender — about the bodies in the clothes and who gets to wear what (and the idea that everyone should get to wear everything) — seemed to take precedence.

G.T.: I don’t envision seeing a lot of Palomo Spain on Wall Street anytime soon. Yet if reporting on this beat has taught me anything, it’s that fashion is the first language of an evolving culture. And whether designers can fully articulate the message they’re carrying (generally not), they are giving us sociopolitical updates when they bypass the official signposts of gender. The gender theorist Eve Kosofsky Sedgwick got it right when she noted that these categories and false oppositions are useful to states but to individuals … not so much.

The best thing — the most critical, even — about what’s happening on runways is we get to see arbitrary gender divisions breaking down in real time. I haven’t enjoyed a show for a long time as much as the recent one for Miu Miu. Miuccia Prada, reigning queen of ambiguities, gave us her take on the physical as political by showing girls dressed as boys dressed as girls dressed as tomboys.

V.F.: I really enjoyed Miu Miu, too, especially the meditation on school uniform and work uniform — which, as you point out and Mrs. Prada made absolutely clear, is classically male. Thom Browne has been playing with this idea for years and always puts men in his women’s variations on the man in the gray suit. Which brings me back to the original point: Women originally dressed in male camouflage in part to infiltrate first the workplace, then the executive suite, then the boardroom (also the boys’ club).

Now that large chunks of the world are finally coming around to the idea that girls can run the world — now that we finally have a female vice president (even if she is always in a pantsuit) — does that mean men will dress in female camouflage? That’s kind of what fashion is underscoring: The balance of power is shifting. These distinctions are just old historical constructs. That’s the symbolism of all this.

And honestly, I bet that may scare … well, the pants off most men.