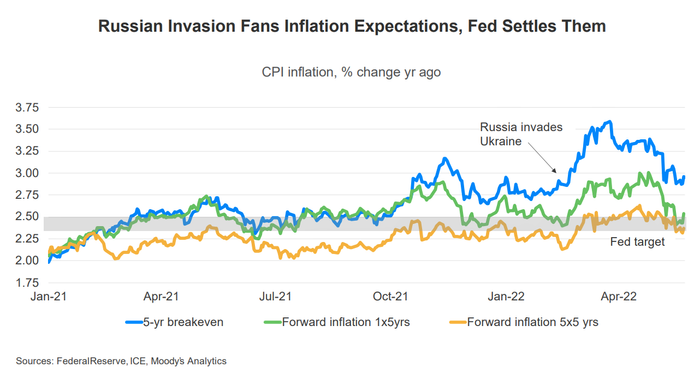 Why? Investors hate them so much, they now look attractive.

Beyond the contrarian angle, here’s the high-level reasoning. When inflation rages, consumers get scared. Investors notice the weak sentiment and sell consumer stocks. But if inflation has peaked, that means these dynamics will reverse and the stocks will go up.

That’ll most likely be the case.

Inflation was largely caused by supply chain issues, demand shocks from excess stimulus, and the Ukraine war-related spike in commodity prices. Now, supply chains are being repaired, “stimmy” checks and Fed stimulus are history, and the worst of the war impact on commodity prices is probably behind us. This tells us inflation will slow. As that becomes apparent, consumer confidence will improve, and consumer-discretionary stocks will outperform.

That’ll be a major reversal, given how deeply they have lagged. The Consumer Discretionary Select Sector SPDR Fund
XLY,

Let’s look at the key concepts in more detail, and then we’ll get to some stocks favored by experts in the industry and corporate insiders.

There’s a strong signal in the forward pricing of bonds (that is, expected interest rates) telling us that inflation has peaked and will fall sharply over time, notes Mark Zandi of Moody’s Analytics.

“Bond investors, who put their money where their mouth is, give us what is arguably the best measure of inflation expectations,” he says.

To see why inflation matters so much for these stocks, consider history. Leuthold group strategist and economist Jim Paulsen recently took a look back and found that major spikes in inflation since the 1950s were linked to significant periods of underperformance by discretionary stocks.

Check out the chart below. Inflation is in red on an inverted scale, which means when the red line heads lower, inflation is higher. As you can see, there’s a pretty close correlation.

By the same token, consumer-discretionary stocks nearly always outperform when inflation declines, as you can see in the next charts.

“Most of the sizable declines in inflation led to important periods of leadership among discretionary stocks,” says Paulsen.

The box on the right shows consumer-discretionary-stock returns in the year after each inflation peak. The chart on the left maps inflation peaks since 1950.

Of course, to buy consumer-discretionary stocks, you have to believe the economy is OK and not going into recession, and that consumers have the strength to spend. Both are probably true.

Plus, companies reported solid earnings and sales growth during the first-quarter earnings season.

“We believe fears of declining economic activity this year will prove overblown unless new negative shocks materialize,” he says.

Hatzius forecasts 2.8% growth in the second quarter, followed by an average of 1.6% over the subsequent four quarters.

As for the consumer, the jobs market remains strong. And consumers have healthy balance sheets. “Excess savings,” or the portion of earnings saved, remains well above historical levels. And interest payments on debts remain remarkably low compared to income.

“In over 40 years of record keeping, American families currently devote the smallest share of their income to interest and principal payments on their debts,” says Zandi.

While consumer confidence has declined, it remains well above its pandemic lows and far from recession territory, notes Vance Howard, who manages the HCM Tactical Growth Fund
HCMGX,
,
which beats competing funds by a long shot, according to Morningstar Direct.

or the Invesco Dynamic Leisure & Entertainment ETF
PEJ,
,
here are several stocks and themes to consider.

Invest in companies that sell experiences

Now that people are out of lockdown, they’re shifting away from spending on stuff at Amazon.com
AMZN,

Instead, they’re spending more on experiences like dining out and travel, says David Klink, a senior equity analyst at Huntington Private Bank.

Yet, spending on “services” companies in retail remains 5% below trend because of weakness in virus-sensitive categories like spectator events and travel, says Hatzius at Goldman Sachs. That suggests room to grow.

and Hilton Hotels
HLT,
.
Chipotle’s drive-through service developed during the pandemic remains a draw. Besides rising demand for travel, Hilton will grow by adding about 5% more rooms per year. Lodging companies are also an inflation hedge because of their ability to reprice rooms quickly.

has it in retail, one reason Cambiar Investor Di Zhou likes the stock.

She also likes the tilt toward high-income consumers, who have higher savings, more discretionary spending power and fewer concerns about inflation. This supports sales growth, even during recessions.

It can pay to follow corporate insiders into stocks. I have suggested most of the names below in my stock letter (you can find a link in my bio below), where I weight buying by smart insiders heavily when considering investment ideas.

First, like our retail expert above, insiders are pointing us to companies that offer “experiences.” These are the services companies that get a boost because people overindulged on stuff during the pandemic.

a director with a good record recently bought $1.2 million worth of stock at $12.18, and at Norwegian Cruise Line
NCLH,

a director bought $1.5 million worth up to $15.25 a share. These are nice signals, reinforced by purchasing at two companies in the same space. Carnival says the week of March 28 was its busiest booking week in company history.

two directors including one with a good record recently bought over $700,000 worth of stock up to $71. First-quarter comparable restaurant sales increased 16% at company restaurants and 20.4% at domestic franchise restaurants.

But insiders also like consumer-discretionary-goods companies. At Crocs
CROX,

insiders including the chief financial officer bought a sizable $950,000 worth of stock at around $50 to $58. Sales grew 47% in the first quarter because of the casualization of footwear trend started during the pandemic, and the popularity of the Hey Dude brand.

5 tips to avoid the shopping frenzy on Black Friday