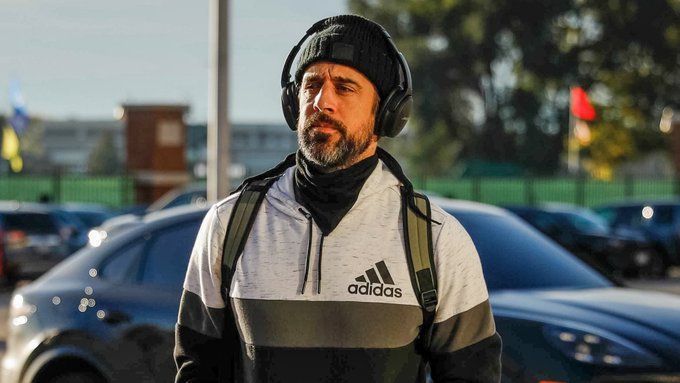 The seventh NFL Sunday of the 2021 season has arrived, and plenty of players are hoping for their fair share of luck as we reach the halfway mark.

Several players will be facing their former teams or visiting old stomping grounds while two AFC powers (Kansas City Chiefs at Tennessee Titans) square off in a rematch of last season’s conference title game. Heightened stakes are commonplace as an NFL season finds its stride, so it’s only right for everyone to dress the part.

The Packers have bounced back in a big way since their 38-3 loss at the New Orleans Saints in Week 1. Green Bay is just the second team in league history to win five straight games immediately following a season-opening loss by 35-plus points (1991 Detroit Lions).

To the surprise of very few, Rodgers has remained every bit as cool, calm and collected as he appears in this week’s pregame attire as the fall weather sets in. He has tossed 12 touchdowns to just one interception during Green Bay’s winning streak.

Week 7 could bring more timely luck for the Packers, who have the NFL’s best home record (16-2) since Matt LaFleur became head coach in 2019.

Tonyan, who has started four games this season after catching a career-high 11 touchdowns in 2020, sported a similar look to his QB on “National Tight Ends Day.”

This football holiday was first created by George Kittle in 2018 to be celebrated every fourth Sunday of October.

Adams, who enters this week one touchdown reception shy of tying Sterling Sharpe (65) for the third most in Packers history, made sure to stunt with the proper kick game ahead of taking the field.

And of course, Jones is never far away with his trademark sombrero. Hopefully it can help snap his season-long streak of three games without a rushing touchdown against the league’s 19th-ranked rush defense.

Ever sharp and focused, Mahomes enters Week 7 with another dapper pregame number as Kansas City seeks back-to-back wins for the first time this season. Despite tossing an interception in five straight games, the 2018 MVP does have multiple touchdown passes in each of his last nine starts dating back to last season.

When asked about his team’s progress up to this point, Mahomes was honest about how he feels: “We’re still nowhere near where we want to be.”

Fortunately for Kansas City fans, the squad does look quite prepared to handle business and find its stride.

Carolina’s fourth-year signal-caller kept his pregame look simple ahead of visiting MetLife Stadium as an opponent for the first time in his career, as the Panthers prepare to face the New York Giants. Though Darnold won’t be suiting up against the New York Jets, with whom he spent his first three seasons as a pro, being back in New York could help right the ship for Carolina.

Last week, he posted his lowest single-game completion rate of the season (41.5 percent) en route to the Panthers’ third straight loss since kicking off 2021 with a 3-0 record.

A much-needed bye week could help the Jets bounce back from their own struggles. Wilson broke out the windbreaker ahead of his first road visit against the New England Patriots, who have a 12-0 home record against rookie quarterbacks since Bill Belichick became head coach.

New York will most certainly lean on Wilson to warm up its offense this week. The Jets have recorded only 79 yards and remain scoreless in the first quarter this season, making them the first team since the 2008 Lions to go scoreless in the opening frame through six games.

It is incredibly easy for the Bengals to both look and feel good entering Week 7. The team’s four wins have already tied last season’s total as they enter Sunday’s showdown with the AFC-leading Baltimore Ravens (5-1).

Burrow & Co. will have their work cut out for them given the team’s recent struggles against its division rival. Cincy scored only six combined points in two games against the Ravens last season and have scored only one offensive touchdown over the past three meetings.

.@JoeyB has arrived in style 💼 pic.twitter.com/0wUElqFZrS

Top o’ the morning to ya’ 👋 pic.twitter.com/sWf5I4J5mg

Whose heart isn’t warmed by a litter of puppies?

The Titans have a partnership with the Nashville Humane Association and Mars Petcare, so it’s only right to open the runway for these furry friends.

Tannehill, who ranks fifth in QBR since becoming Tennessee’s starting quarterback midway through 2019, made sure to get his fair share of good luck from a new friend.

Earlier this week, it was announced Tannehill teamed up with Mars Petcare to ensure these puppies and many others can find a safe home.

Ryan Tannehill has teamed up with @MarsPetcareUS to announce they will cover $100K in adoption fees at local shelters in Nashville and Kansas City this weekend (10/22 – 10/24) to help deserving pets find loving homes.

Brown is enjoying arguably his finest season since turning pro in 2019. He is averaging a career-best 15.2 yards per reception and is on pace for his first season with 1,000 receiving yards. That said, the third-year pro is coming off a season-low 35 receiving yards last week.

Fortunately, though, few things can provide a proper confidence booster better than the neckwear Brown sported as he entered M&T Stadium.

Well, of course, that depends on whether you ask Ricard on the finer points of fashion.

I clearly have the best swag on the team 🤣🤞🏽 https://t.co/JBkSerdnZ3

The two-time All-Pro has enjoyed many successes before enjoying his 27th birthday Sunday.

Though Ramsey kept his wardrobe straightforward, rolling up in style with the blue carpet awaiting you seems to be a proper way to bring in a year of achievements.

Only one way to pull up on your birthday!

Donald pulled up to SoFi Stadium looking silky smooth in his pregame threads. Entering Week 7 with 89 career sacks over his eight seasons with the Rams, the three-time AP Defensive Player of the Year needs only two more to tie Hall of Famer Merlin Olsen for the third most in team history.

Murray & Co. enter Week 7 seeking the Cardinals’ best start since 1974 (7-0). Murray is coming off a performance highlighted by four touchdown passes (tying his career high) and hasn’t tossed an interception since Week 3 against the Jacksonville Jaguars.

On the season, he’s completing an NFL-best 73.8% of his passes. Judging by his threads heading into State Farm Stadium, Arizona’s budding superstar appears quite ready to once again reach deep into his bag.

With Arizona hosting the Houston Texans, both Hopkins and Watt will be facing off against their former team, with whom both established their Hall of Fame trajectories.

Watt appeared to be business as usual before facing his former team, though he kept his threads rather casual. Nonetheless, this matchup offers a unique opportunity for the five-time All-Pro. Houston is one of only four teams Watt hasn’t been credited with at least a partial sack against (including playoffs).

For the curious minds, the others are the Chicago Bears, San Francisco 49ers and Los Angeles Rams.

Offenses beware… @JJWatt is in the building. pic.twitter.com/0L9AYbnZG1

Chicago is hoping to avoid falling under .500 in its matchup against the defending champion Tampa Bay Buccaneers. Sharp threads alone won’t get the job done, and the tall task of facing Tom Brady, who is starting opposite of rookie Justin Fields, might pose the biggest issue for the Bears.

According to Elias Sports Bureau, Tom Brady has won 10 straight starts against rookie quarterbacks dating back to 2014, one shy of tying Len Dawson for the second-longest streak since 1950.

Still seeking his first 100-yard rushing performance of the season, Jacobs channeled his inner Tecmo Bowl in pursuit of a breakout game. Since rushing for 112 yards against the Denver Broncos in Week 9 of 2020, Las Vegas’ lead back has topped 80 only once (Week 16 at Denver).

If the Raiders need further assistance in spicing things up, they need not look further than the Mayor of Flavortown, Guy Fieri.

The Food Network star stopped by with his family to watch the Raiders host the Philadelphia Eagles, who enter Week 7 winless in their last seven outings against AFC opponents (0-6-1).

.@Raiders game with the boys!