New boutique hotel has a story to tell in Charlotte 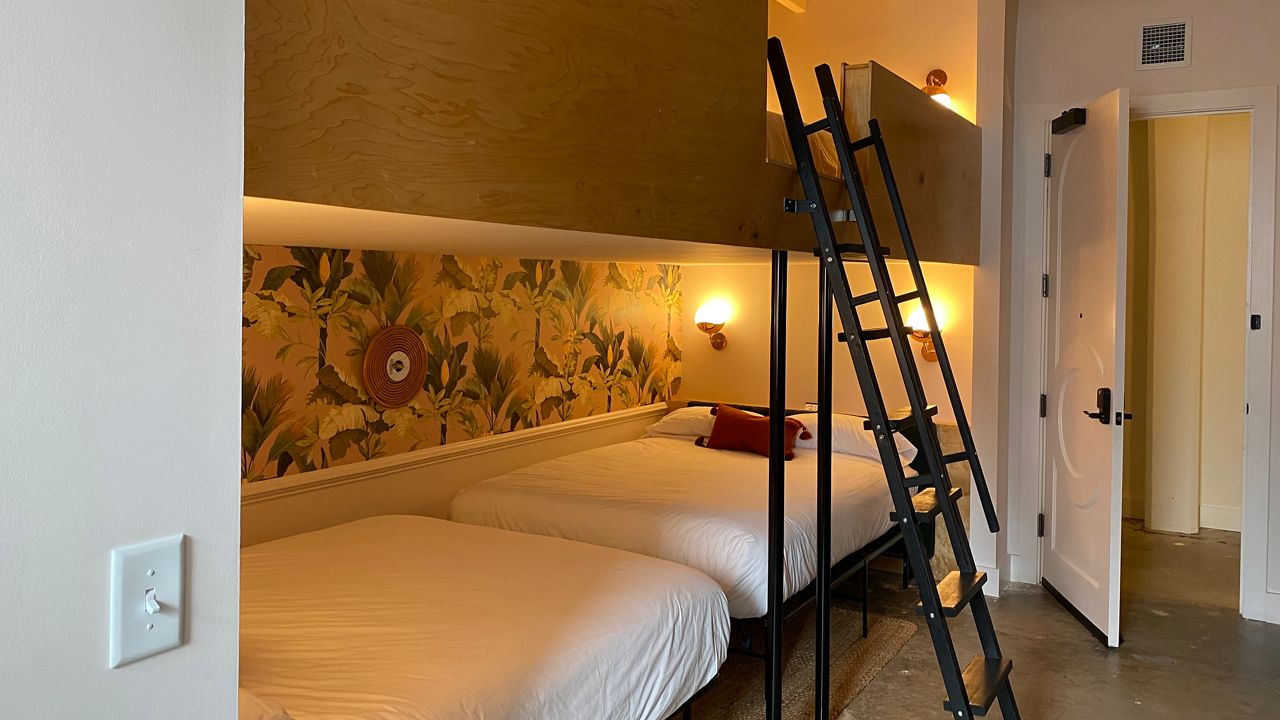 CHARLOTTE, N.C. — The folks behind a new mini-hotel in Charlotte are hoping to add to the face of some of the city’s neighborhoods and be a part of their story.

What You Need To Know

In a small building on Central Avenue, Charlotte’s newest hotel is open and ready for business.

“Our main hope is that people connect with the story we’re trying to tell,” Nimisha Patel said.

Nimisha Patel and her husband, Jay Patel, are two of the partners leading Wintergreen Hospitality. Jay Patel’s brother is the third.

Patel said the hospitality business was in his blood, which is why he founded Wintergreen Hospitality in 2007 after working for Marriott.

“We grew up in the business, literally on the premises of the mom and pop roadside motels that our families were owning and operating. We didn’t live in normal homes, we lived behind the front desk,” Patel said in the lobby of his newest project.

The five-bedroom hotel, located at the intersection of Central Avenue and Hawthorne Lane, is Patel’s latest venture into North Carolina-based hotels. He said Charlotte was the No. 1 priority for further expansion.

“Charlotte just called to us, ’cause it’s growing so much and it’s such a big demand for lodging and hospitality experiences,” Patel added.

Spending nearly four decades in hospitality, dating back to the cradle, Patel is looking forward to interacting with Charlotte’s visitors.

“I just have known since I was a young kid growing up in our family’s hotel properties, that I just love anything to do with human interaction, customer service,” he said.

Patel’s parents, and his wife Nimisha’s, immigrated from England and India in the 1980s. When the families first moved to the United States, they settled in Charlotte. Patel’s hospitality business operates hotels in North Carolina and Virginia.

The company, which is technically based in Chapel Hill, is now a show on the road. Jay and Nimisha Patel packed up their lives, kids and business, moving to Charlotte to keep an eye on the Refuge project.

“We’re going to stay in Charlotte, we brought our kids down here, just to make sure we have the best possible chance of doing this right,” Patel said.

The “this” is their new boutique hotel, featuring just five bedrooms and a pop-up bar.

The bar, named Rumaway Cove, is run by the folks behind The Royal Tot, which was expected to open this summer, according to the bar’s Instagram account. Focusing on speciality rum cocktails, the Rumaway Cove is all part of the larger Refuge experience.

“The group behind Royal Tot, they are honing in on rum. So, that is a clear marker they are trying to be very specific about the beverages they are offering to their guests. And not only is there a specificity, but there is a level of excellence and quality that they’re committing to,” Nimisha Patel said in front of the bar.

The bar is open 5 p.m. to midnight on Wednesdays through Fridays, and open from 3 p.m. to 2 a.m. on Saturdays.

“We wanted to ensure that any of our consumers that come in on the lodging side, or from the local community, they receive that type of experience,” she added.

But Patel did not stop at the bar, she gave creative direction on each room of the Belmont neighborhood hotel, which sits on the borders of Elizabeth and Plaza Midwood.

“A core principle of our design was to really play up colors and shapes and materials. And, just really provide things in the room that will allow people to pause and think and really provoke their day-to-day experience,” Patel said on a tour of one of the rooms.

None of the rooms are the same and all have distinct names: “The Residential Suite,” “We’re Not in Kansas Anymore,” “Take a Trip,” “Proper Room for Four” and the “Pack. And Play.” All sleep two or four people. Combined, the hotel holds 15 people at room capacity. The bar space can handle about 25-30, according to Refuge staff.

But the hotel is also meant to tell a larger story.

“Fifty percent of the rooms in the United States are owned by Indian Americans. It’s a sector that has spanned two generations, even three generations now. So, we have contributed a lot to the space. And, we feel like we want to tell our story, and what better place to tell our story through the medium of a hotel experience,” Patel said.

While providing creative direction focusing on art, colors, textures and overall experience, she said they connected their Indian heritage with each room.

“That doesn’t have to happen in obvious ways, all of the time. It can happen through shapes, it can happen through texture and material and forms. Each one of our rooms on the outside have arches, which is very distinct to Indian culture and design as well,” she explained.

Design decisions were thought out, even down to the photography, which is licensed from an Indian fashion house campaign and meant as an expression of Indian women taking more power in society.

“We’ve had experience ourselves, being others,” Patel added.

However, maybe the most unique thing about Refuge is its temporary status.

“The five rooms is really our test kitchen, if you will, and it’s a way that we’re — it’s a mechanism we’re using to innovate around how we should design the ultimate hotel,” Jay Patel said.

The property is and was not meant to be permanent. Instead, Patel and his team will transform the space again in the next three years, potentially building a 150- to 200-room hotel on the land.

“We’re going to develop this piece of property maybe in two or three years, but until we do that  we’re using this five-room concept, which we’re calling Refuge, as our learning lab. In which, to figure out how we should bring that future project to life,” Patel added.