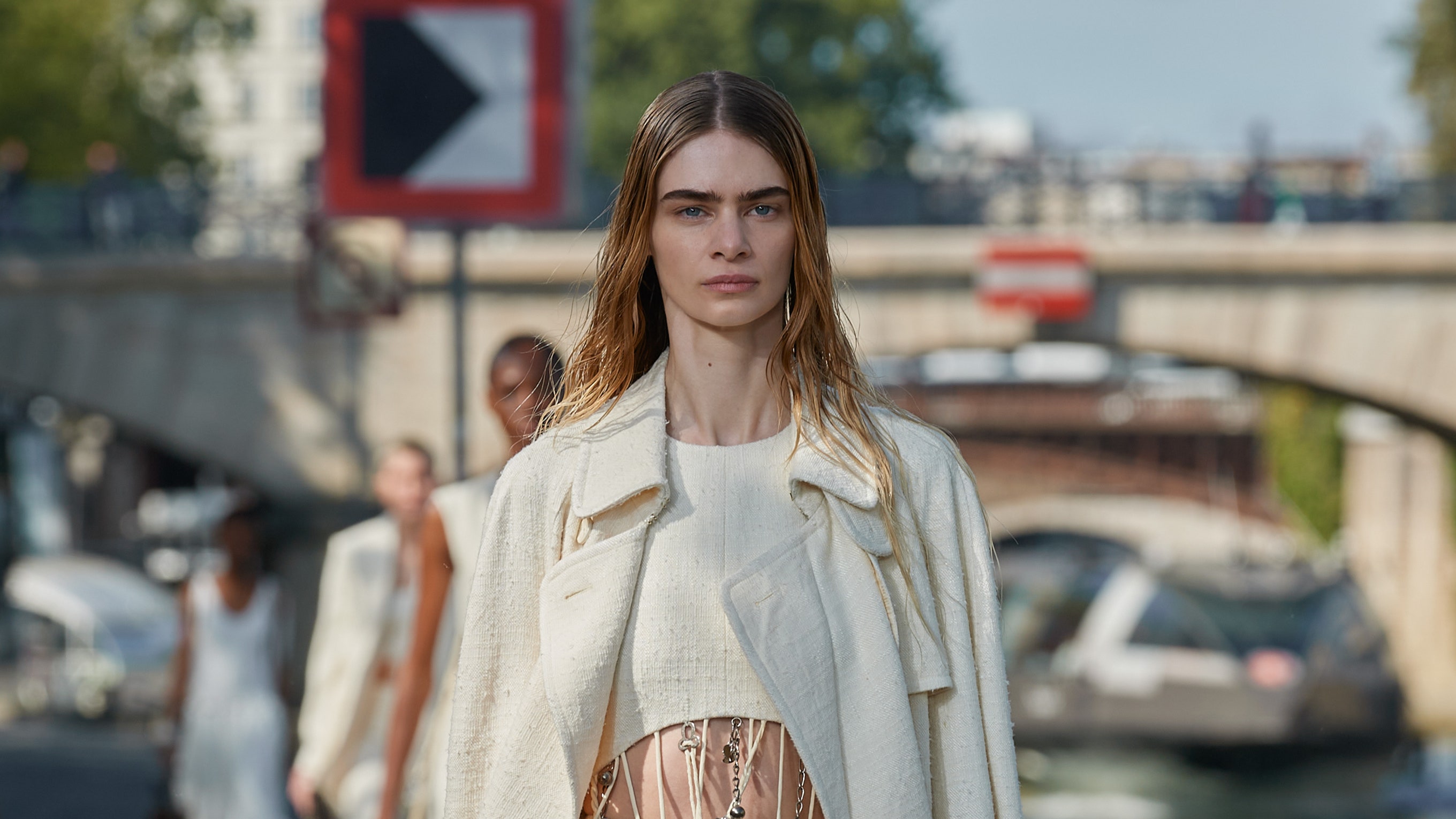 There was a lovely moment of happenstance at the first Chloé show to gather a live audience together since you-know-when. There we were, sitting by the Seine, watching the girls walking along the Quai de la Tournelle in brilliant sunshine. A second audience of Parisian passersby was sur le pont to the right. And just at the very moment the finale began, a packed riverboat sailed past, full of accidental fashion show spectators waving and delighted on deck.

Somehow, this all felt like a very Gabriela Hearst moment, because the practice of sharing and openness is her all over. “As cheesy as it sounds, this collection is about love,” she said in a preview. “It’s really about the love of so many things: the love of craft, the love of friendship, the love of fellow humans. I literally have to memorize how many different NGOs, because I am working with so many this season.”

You get the free-flowing, unforced boho spirit of what Hearst is doing with Chloé from the 31 pictures of the show. What with its summer-holiday caftans, ponchos, lacy dresses and smattering of boyish pant suits, the collection is fully in the tradition of the free-spirited Chloé-girl brand identity that has been passed down from hand to hand by a succession of women designers from Stella McCartney and Phoebe Philo onwards.

What’s very different with Gabriela Hearst is, first of all, the reduced number of looks in the shows: down to 31 from sometimes over 50. And secondly, the meticulous and quite formidable way she’s bringing in changes in sourcing, the supply chain, traceability, environmental and social responsibility to a major Paris fashion brand.

All the information is documented in the Chloé press release and on its website: progress toward what all fashion houses ought to look like internally in this age of climate emergency. At points—when you consider how many women’s organizations and communities Chloé is benefitting through buying strategies around the world—it almost begins to seem possible that this work could even be marking a shift in the entire purpose of a luxury brand’s existence.

One step in that direction is that the most exclusive level of Chloé luxury is now being launched as Chloé Craft—a group of products with a spiral logo, denoting, as Hearst puts it “that only a human hand can make those pieces.” In the spring collection, those hand-skills are evidenced in pieces like the petal-patterned crocheted dress, and the intricately knotted streamer-harnesses made of strips of leftover fabric from seasons before—techniques created by Akanjo, a social enterprise organisation in Madagascar. The chunky seashell-and-macrame necklaces, as well as baskets which come labeled with the name of the person who wove them, also bear the spiral branding.

Shifting the needle towards causing less environmental harm primarily comes in Hearst’s creditable insistence on fabric-switching. For example, there’s more linen, less cotton involved in this collection. It’s used to chic effect in the cream pieces, including a generous, Hearst-signature trench coat with a cool heft and whip-stitched leather edging. And, more surprisingly, in a great indigo blue pant-suit which at first sight seems to be denim, but is in fact a beautifully soft, supple linen.

Underfoot, as well as the eco-friendly Nama trainer launched this year, a new and delightfully multicolored deep-soled Chloé flip-flop was treading the Parisian riverside quai. In fact, all the pretty, pastel layers pressed into the soles were once other flip-flops. “They’re from Ocean Salt, which I’ve been wanting to work for a long time!” Hearst declared with glee. “They are a Kenyan non-profit that collects flip flops out of the ocean.”

All the applause from the people of Paris, boat-trippers and fashion audience alike were well-deserved for the progress she’s pushing through.